Here is a pretty Warhol-esque picture I made using a) my own head, b) a Siemens Verio MRI scanner, c) Osirix and d) GIMP. 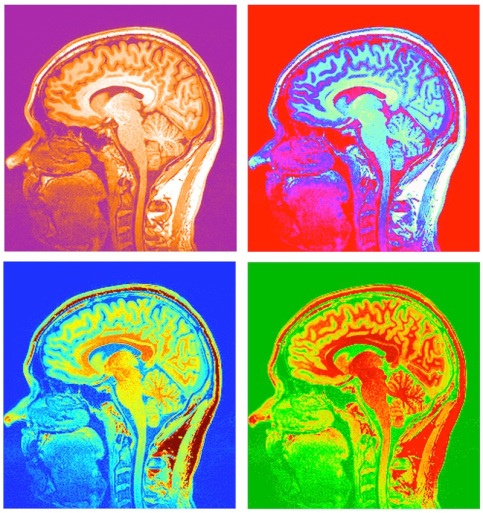 The Adventures of Ned the Neuron – an interactive, educational ebook. 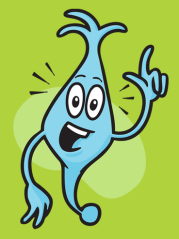 A quick post to point you to something that looks like a serious case of the funsies. It’s an interactive ebook that’s just been released detailing the adventures of Ned the Neuron – a proper story-book, but with three interactive games built in, all with the aim of teaching kids about basic neuroscience. It’s produced by Kizoom Labs, which was co-founded by Jessica Voytek (one of the developers, along with her husband Brad, of the excellent brainSCANr site).

You can read more about the book on the Kizoom site here, or download it (iPad only) from the iOS App Store here.

A recreation of the world’s first neuroimaging experiment – LIVE!

A break from normal service today, as I thought I’d post up a little video of me being silly on stage on the occasion of Science Showoff  a few weeks ago. Science Showoff is a fantastic open-mic night for science communication, organised by the inimitable Steve Cross of UCL. People get up on stage in the back room of a pub in Clerkenwell, and do science-y things for the amusement (and occasionally even for the education) of the crowd.

For their May event, I thought I’d have a go at re-creating the world’s first brain-imaging experiment, live, on-stage, using nothing more than a table, a rolling-pin, and a kitchen scale. How was such a feat accomplished (I hear you gasp, dear reader, in tones hushed with reverential awe)? I shall explain.

What’s often called ‘the world’s first neuroimaging experiment’ was conducted by a gentleman by the name of Angelo Mosso in the late 19th Century; a professor of physiology at the University of Turin. He’s generally credited with the notion that blood flow in the brain is related to mental activity; he arrived at this conclusion by studying patients with open head wounds – the pulsations of their dura would increase in frequency when the patients became agitated or engaged in some demanding mental task.

He also (apparently) designed an experiment in order to see the effect of increased blood flow during mental activity in ‘normal’, uninjured people. This was the first time an external apparatus had been used to visualise the internal processes of the brain – hence ‘world’s first neuroimaging experiment’. I say ‘apparently’ because the only write-up we have about the experiment is from William James’ journal of 1890:

“The subject to be observed lay on a delicately balanced table which could tip downwards either at the head or the foot if the weight of either end were increased. The moment emotional or intellectual activity began in the subject, down went the balance at the head-end, in consequence of the redistribution of blood in his system…”

Now, most people who’ve written about this experiment since, have generally cast doubt on the idea that this could ever actually work. But, being on occasion an incautious type, and thinking that even if it didn’t work it could at least be amusing, I figured I’d just give it a try. I used a couple of modern-day modifications – I got a cheap digital scale off Amazon, which could distinguish increments of 0.1g, and used a webcam pointed at the scale’s readout to display it to the crowd via a projector. I rested the head-end of the balance-board on the scale, and figured that any increase in blood-flow to the brain should result in an increase in weight on the scale. The able and moderately-willing volunteer for the experiment was my good friend Thom Scott-Phillips of Edinburgh (and Durham) University and the video was shot by Rita Santos. Unfortunately it’s impossible to make out the scale readout on the video, but it definitely worked. Oh yes. Absolutely. *Ahem*. I’m also slightly embarrassed to admit that it contains quite a few of the naughty swears, but, y’know, it’s just that kind of event. If it’s alright for Ben Goldacre, then it’s alright for me, dammit.

Without further ado then – the video (watch it on YouTube for glorious 720p):

Computers and brains get closer together: Brain-like computing components

The brain is like a computer; this is the fundamental metaphor at the heart of 1980s cognitive psychology. To an extent this was a useful way of thinking about the brain, it certainly stores and processes information just like a computer, and you can even (perhaps) draw some rough parallels between parts of the brain and computer components.

However, in at least one important respect, the brain appears to function very differently from a computer. A computers’ processing power is highly centralised in a single processor (or perhaps a dual/quad core processor – doesn’t matter – still centralised). The processor does all the computational work, and the hard disk stores all the data that the processor works on. This means that data is constantly being shuttled back and forth from the hard disk to the processor (using the RAM as an intermediary, to avoid the hard disk spinning up and down all the time) and this transfer of data is slow, inefficient and creates a bottleneck which restricts the maximum speed at which computers can run. END_OF_DOCUMENT_TOKEN_TO_BE_REPLACED

This one’s a bit advanced for the kind of information I generally want to include on here, but I thought it might be useful to somebody, so I’d put it up. I was recently asked to do a talk on fMRI software, so put together a presentation comparing three popular choices for analysing brain imaging data: SPM, BrainVoyager and FSL. I’ve used all three packages in the past for my work, although I’m not so expert with the new versions of SPM as I used to be. The talk was pretty basic, and focussed more on features and the UI experience of the three applications, rather than any technical details.

One of the things that psychology/neuroscience students often find hardest is learning about brain anatomy. Most psychology courses nowadays have some neuroscience element to them, and for beginners unfamiliar nomenclature like ‘ventro-lateral prefrontal cortex’ and ‘rostroventral-medial medulla’ can be (rightly) terrifying. Further confusion can be caused by some papers referring to numbered Brodmann areas, and other papers preferring to use functional descriptions of brain areas, such as ‘motor cortex’ or ‘hMT/V5’. The primary visual cortex in the occipital lobe might be referred to functionally (V1), by Brodmann area  (17), anatomically (calcarine sulcus) or cytoarchitectonically (‘striate cortex’).

A lot of this confusion can be cleared up by a bit of basic reading. The wikipedia page on Anatomical Terms of Location is excellent, as is this very clear page specifically on anatomical terms used for the human brain. Brodmann areas are also explained here. END_OF_DOCUMENT_TOKEN_TO_BE_REPLACED